Mystery Amulet Circle is an Easter Egg in Onmyoji.  It only triggers when you do a rare summon (either by Amulet or by Jade) by drawing a special pattern.  The pattern resets every month and each player can only claim the prize once.

The reward is a Rare Summoning Amulet so this means at the end of the day, you get one rare summon for free. 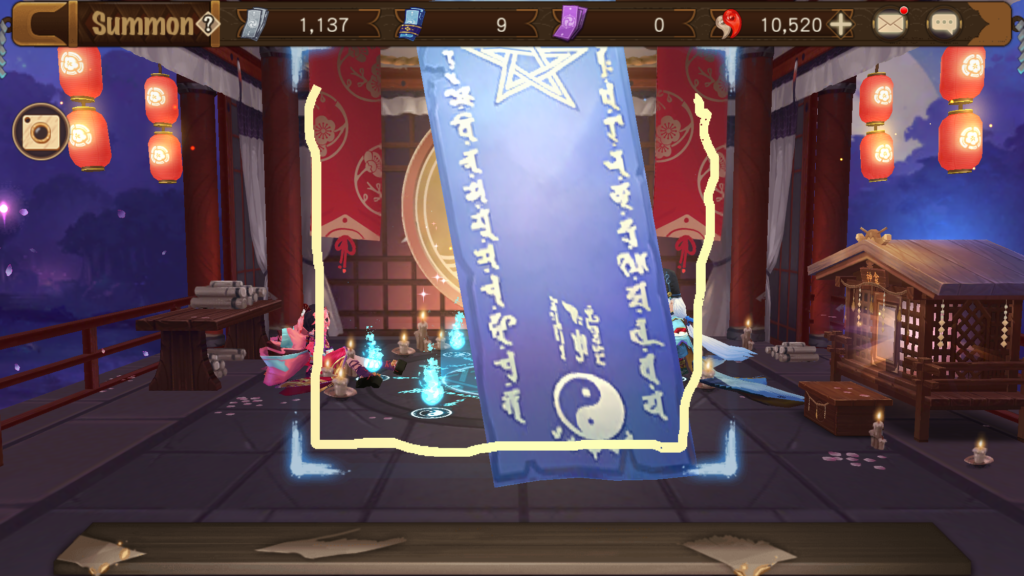 The June/December Mystery Amulet Circle is a really two horizontal lines across the screen in one stroke.  The trick is drawing it in one stroke, which requires you to draw outside the box.

All you need to do is to draw line 4 and 6 in the picture.  In my video, the pattern works even if I messed up the two vertical lines.  If you have trouble drawing the full Torii, give the two lines a try. This is an outdated picture. All you need is draw line 4 and 6 if you have trouble with the full Torii.

The May/November Mystery Amulet Circle is a “V” that you have to draw in one stroke.  This is going to be a tricky one to trigger so I suggest the following:

This month’s pattern is a “V” shape. Trick is to make sure we hit the border.

Here is the April/October Mystery Amulet Circle.  It’s a diagonal line from the bottom left corner to the upper right.  A word of caution: this time it took me quite a few tries to succeed.  Maybe it’s just me but I feel this time it’s more difficult to get it right.

March/September Mystery Amulet Circle is a straight line across the screen just below the two banners.

This month is a straight line across the middle. I was able to do it with this not-so-straight line lol. The position should be just below the two hanging banners.

The Mystery Amulet Circle for this month is a straight line from top to bottom in between Kagura and the Amulet. This is the Feb pattern. I didn’t draw too well in the picture. The line should go all the way from top to bottom. Try a few times if you have to.